Last year was my first year taking part in the 20 Books of Summer reading and reviewing challenge. Three themes this year for me: insects, climate and weather, road trip, plus some set reading and random unread books. Decisions will have to be made. This is my exceptionally long longlist. 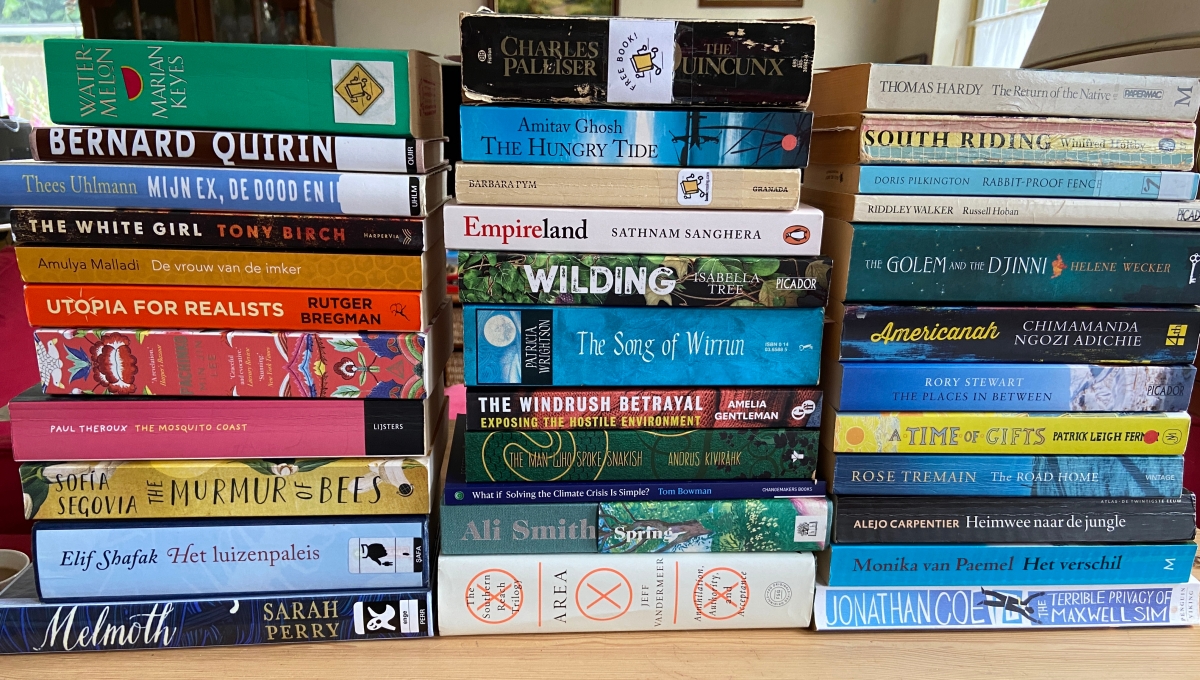 This is my second year joining the 20 Books of Summer challenge run by Cathy at 746Books. Last year I (more or less) completed my 20 books, but only managed to write short reviews for most of them. This year I will be extremely surprised if I don’t have to reduce the number to 15 or even 10 because of the size of some of them. On the other hand, several of those thick books are actually trilogies so will count for three if I run out of time. Due to chronic indecision, my longlist consists of 37 books, so not everything on this list will be read this summer. It’s so difficult when you want to read everything on your book pile, now!

Every year, I take part in a challenge with monthly reading themes. This summer the themes are insects and bugs (June), weather and climate (July) and road trip (August). I have split my possibles into 3 piles to match the themes, bar a couple on the wrong pile to even them up for the photo. There are a couple of non-themed library books and even invisible books, i.e. ARCs in ebook form from the newly-discovered Book Sirens. Other challenges I’m trying to include are books from or about different countries and one or two 1001 books. The 20 Books of Summer challenge is a fantastic way of including Books I Never Seem to Get To, though this year I’ve tried to stick to the main three themes.

20 Books of Summer, the longlist

Books I Never Get To

Obviously I won’t read all of these books. I’ll pick and choose out of the piles and try to remember to read the ones that have deadlines in time. And somehow I have to find some time to write reviews, too. I’m almost tempted to make a spreadsheet, but that would just be procrastination. Let the mad reading begin!

This site uses Akismet to reduce spam. Learn how your comment data is processed.

Born in Kent, the market garden of England, I now live in the area of the Netherlands where Operation Market Garden took place. This blog revolves around books in English and Dutch and my thoughts on books, libraries, language. I also blog as Integrated Expat, focusing on my life in the Netherlands, travel, gardening and anything else.